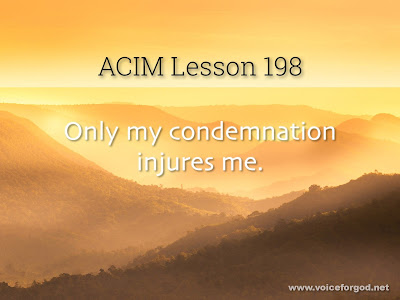 Only my condemnation injures me.

1. Injury is impossible. And yet illusion makes illusion. If you can condemn, you can be injured. For you have believed that you can injure, and the right you have established for yourself can be now used against you, till you lay it down as valueless, unwanted and unreal. Then does illusion cease to have effects, and those it seemed to have will be undone. Then are you free, for freedom is your gift, and you can now receive the gift you gave.
2. Condemn and you are made a prisoner. Forgive and you are freed. Such is the law that rules perception. It is not a law that knowledge understands, for freedom is a part of knowledge. To condemn is thus impossible in truth. What seems to be its influ­ence and its effects have not occurred at all. Yet must we deal with them a while as if they had. Illusion makes illusion. Except one. Forgiveness is illusion that is answer to the rest.
3. Forgiveness sweeps all other dreams away, and though it is it­self a dream, it breeds no others. All illusions save this one must multiply a thousandfold. But this is where illusions end. For­giveness is the end of dreams, because it is a dream of waking. It is not itself the truth. Yet does it point to where the truth must be, and gives direction with the certainty of God Himself. It is a dream in which the Son of God awakens to his Self and to his Father, knowing They are one.
4. Forgiveness is the only road that leads out of disaster, past all suffering, and finally away from death. How could there be an­other way, when this one is the plan of God Himself? And why would you oppose it, quarrel with it, seek to find a thousand ways in which it must be wrong; a thousand other possibilities?
5. Is it not wiser to be glad you hold the answer to your problems in your hand? Is it not more intelligent to thank the One Who gives salvation, and accept His gift with gratitude? And is it not a kindness to yourself to hear His Voice and learn the simple lessons He would teach, instead of trying to dismiss His words, and substitute your own in place of His?
6. His words will work. His words will save. His words contain all hope, all blessing and all joy that ever can be found upon this earth. His words are born in God, and come to you with Heaven’s love upon them. Those who hear His words have heard the song of Heaven. For these are the words in which all merge as one at last. And as this one will fade away, the Word of God will come to take its place, for it will be remembered then and loved.
7. This world has many seeming separate haunts where mercy has no meaning, and attack appears as justified. Yet all are one; a place where death is offered to God’s Son and to his Father. You may think They have accepted. But if you will look again upon the place where you beheld Their blood, you will perceive a mir­acle instead. How foolish to believe that They could die! How foolish to believe you can attack! How mad to think that you could be condemned, and that the holy Son of God can die!
8. The stillness of your Self remains unmoved, untouched by thoughts like these, and unaware of any condemnation which could need forgiveness. Dreams of any kind are strange and alien to the truth. And what but truth could have a Thought which builds a bridge to it that brings illusions to the other side?
9. Today we practice letting freedom come to make its home with you. The truth bestows these words upon your mind, that you may find the key to light and let the darkness end:
Only my condemnation injures me.


Only my own forgiveness sets me free.

Do not forget today that there can be no form of suffering that fails to hide an unforgiving thought. Nor can there be a form of pain forgiveness cannot heal.
10. Accept the one illusion which proclaims there is no condemna­tion in God’s Son, and Heaven is remembered instantly; the world forgotten, all its weird beliefs forgotten with it, as the face of Christ appears unveiled at last in this one dream. This is the gift the Holy Spirit holds for you from God your Father. Let today be celebrated both on earth and in your holy home as well. Be kind to Both, as you forgive the trespasses you thought Them guilty of, and see your innocence shining upon you from the face of Christ.
11. Now is there silence all around the world. Now is there stillness where before there was a frantic rush of thoughts that made no sense. Now is there tranquil light across the face of earth, made quiet in a dreamless sleep. And now the Word of God alone remains upon it. Only that can be perceived an instant longer. Then are symbols done, and everything you ever thought you made completely vanished from the mind that God forever knows to be His only Son.
12. There is no condemnation in him. He is perfect in his holiness. He needs no thoughts of mercy. Who could give him gifts when everything is his? And who could dream of offering forgiveness to the Son of Sinlessness Itself, so like to Him Whose Son he is, that to behold the Son is to perceive no more, and only know the Father? In this vision of the Son, so brief that not an instant stands between this single sight and timelessness itself, you see the vision of yourself, and then you disappear forever into God.
13. Today we come still nearer to the end of everything that yet would stand between this vision and our sight. And we are glad that we have come this far, and recognize that He Who brought us here will not forsake us now. For He would give to us the gift that God has given us through Him today. Now is the time for your deliverance. The time has come. The time has come today.
Source
Feel free to post a comment of any length and detail here or in any place you see this shared AFTER you have contemplated the lesson for some time and done the suggested exercise at least once. And never hesitate to ask any questions you might have.

Support for my mission and family highly appreciated

Schedule a FREE discovery session with me 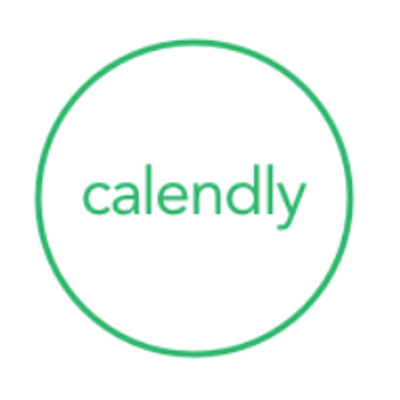